(Originally published at Inside Hockey) Monday afternoon the San Francisco Bulls announced that they would cease operations immediately. They only played 40 games of their second season. The attendance reports are there on the ECHL site for anyone to see, like the catastrophic vitals of a terminal patient. The resounding silence of their marketing campaign, so boisterous … END_OF_DOCUMENT_TOKEN_TO_BE_REPLACED 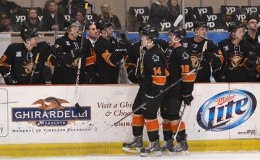 (Originally published at Inside Hockey) The San Francisco Bulls have won two of their last three games, after losing two of three to the Aces. They won at home against the third place Colorado Eagles, and on the road against their nearby rivals and last season’s Western Conference Champions, the Stockton Thunder. In between those wins, … END_OF_DOCUMENT_TOKEN_TO_BE_REPLACED

(Originally published at Inside Hockey) The Alaska Aces may not be the runaway ECHL points leaders they were last season, but they still occupy a special, dark place in the hearts of the San Francisco Bulls and their fans. Last weekend’s trio of games at the Cow Palace did little to change that. Despite a stunning … END_OF_DOCUMENT_TOKEN_TO_BE_REPLACED

(Originally published at Inside Hockey) The San Francisco Bulls will play three games in three days between Thursday and Saturday, all against the Alaska Aces, and all at the Cow Palace. They should be interesting games. Since their three-game sweep of the Utah Grizzlies (December 18 to 21), the Alaska Aces haven’t lost two games in … END_OF_DOCUMENT_TOKEN_TO_BE_REPLACED

(Originally published at Inside Hockey) The San Francisco Bulls started a six-game homestand last weekend, with two games against the top two teams in the ECHL’s Pacific Division. The Bulls lost the first to Ontario 4-1, and won the second against Stockton in a shootout 6-5. The loss was a big let down after the team … END_OF_DOCUMENT_TOKEN_TO_BE_REPLACED